Colchicine (pronounced: kol'-chuh-seen, -sin) is an old herbal remedy that has endured into present time.

Before we got so absorbed in patented drugs to treat every single thing that ever happens to a person, we relied on natural remedies and naturally occurring substances.

This is one of those natural substances. It came from the plant called Colchicum autumnale, commonly called: meadow saffron. It is a poisonous plant that was originally used internally as a cathartic (powerful laxative) and emetic (make you vomit). 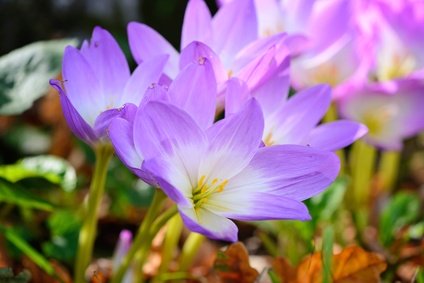 Later is was found useful in suppressing inflammation and was used topically (on top of the skin) to treat rheumatic complaints and gout. It is still used for that purpose today.

It modern research it was found to inhibit the formation of scar tissue. So, they started injecting it into bent penises. But, it doesn't do anything to the existing scar. Nothing. It's like closing the barn door after the horse has already run out!

in reality
Colchicine is useless
for straightening
a Peyronies disease curvature

This is yet another of the injectables used in treating a bent erection caused by Peyronies Disease. It has proven to be highly IN-effective. It does almost nothing.

It may help prevent the formation of further scar tissue. This may keep the erection from getting more bent. But the existing scar or plaque remains. So does the bend.

Here are the findings from the report  published by US National Library of Medicine National Institutes of Health. June 16,2004:

"After (colchicine) therapy, in subjects and controls..... Objective measurements did not demonstrate any difference in plaque size or penile curvature. Colchicine is no better than placebo in improvement of pain, curvature angle, or plaque size in patients with Peyronie's disease."

Why do you think they used to use it as a laxative and to make people vomit? The human body knows it is poisonous hates it.

"Using this substance to treat Peyronies Disease just doesn't make sense. You will never straighten your erections with it
and
it may cause serious harmful side effects."

It is a toxic plant in the family Liliaceae. It is also called: meadow saffron, saffron, autumn crocus. It contains two poisonous alkaloids, colchicine and colchiceine. Taken internally, it causes severe, often fatal enteritis with diarrhea and abdominal pain.

It's use can produce many side effects. Some very serious. The most serious side effect is death. It can also damage the bone marrow causing severe anemia and seriously low white blood counts. This greatly increases the risk of infections.

Other side effects include: hair loss, weakness, and nerve irritation.

Colchicine poisoning has been compared to poisoning from arsenic. Symptoms include: burning in the mouth and throat, fever, diarrhea, vomiting, abdominal pain, and kidney failure.

The symptoms usually start 2 to 5 hours after the toxic dose has been ingested. Death from respiratory failure can follow. There is no specific antidote for it. Various treatments do exist.

This is just another toxic substance that will never make your curved or bent penis straight again. It is probably even more useless than the rest of the injectables like Verapamil and Collagenase. And probably far less toxic than steroids.

But why use it? It will not straighten you out and it may make you seriously ill.

The goal is to straighten your member as safely and effectively as possible. Colchicine is not going to do that. A simple medically approved penile traction device almost always will.

It's Easy
To
Fix A Bent Penis!

Doesn't it just seem really stupid to "sort of kind of" address your problem? With a potentially toxic substance? And risk some severe side effects when you can truly remedy the problem in a much simpler and safe way?

What you want is a straight healthy erection. Isn't it?

Of course! We are just too caught up in wanting a quick fix these days and believing drugs fix everything. They don't! And many of those quick fixes don't solve our problems. They often cause much more harm than good.

The clinically proven
Safest and Most Effective way to fix a bent penis,
is correct penis traction.

Simple correct traction is so effective that it is FDA approved and medically recommended in 29 countries world wide.

Your bend is not a "disease". It is condition. It is a simple scar or plaque that does not stretch as freely as normal tissue. Then the erection bends in the direction of the shorter tissue. That's all "Peyronies Disease" is.

Once you lengthen the shorter tissue sufficiently, the erection will then be straight again.

"It becomes very obvious
that no injections, drugs, or dangerous surgeries are necessary
to straighten 99.99% of these curvatures."

It has been clinically proven over and over again: you can easily stretch the scar or plaque that is causing a bending erection, using proper penis traction, to the point where the scar/plaque will be long enough to produce a normal erection.

At that point the shaft will no longer bend significantly when erect. Nor will the scarred area continue to cause pain when erect.

There is just no reason to risk the toxic effects of Colchicine in this case. It is simply another of the useless treatments for Peyronies Disease.